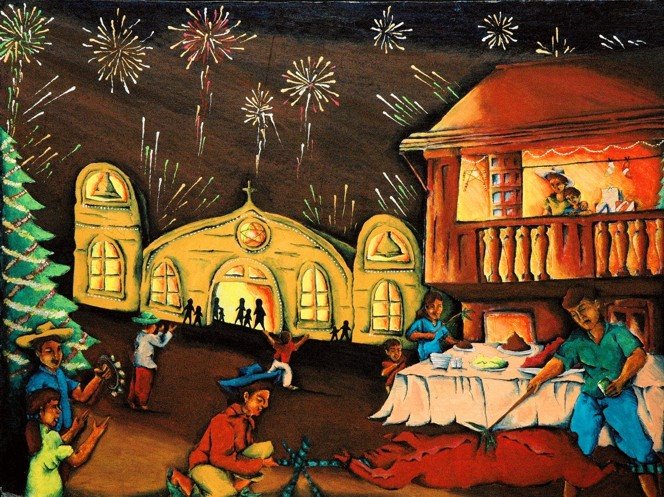 Different Christian cultures have adapted a way in celebrating the season of Advent. In the Roman Catholic tradition, it is the time of expectant waiting and preparation for the celebration of the Nativity of Jesus at Christmas. For Filipino Roman Catholics, the Simbang Gabi (literally means night worship) is a typical way of preparing for the great feast of Christmas. This religious tradition was brought to the Philippines by the Spanish evangelizers through Mexico. Originally, it was popularly known as Misa Aguinaldo. The “Aguinaldo” means gift, which is peculiar to Christmas. That is why, the faithful wake up early morning for nine days before Christmas to join in the celebration of the dawn Mass. The faithful make this their “Aguinaldo” to God for the great gift of Jesus. The practice can also be understood as the preparation of the faithful to receive from God the great gift or “Aguinaldo” of Christmas, Jesus, the Savior of the world. Simbang Gabi is also called Misa de Gallo or Mass of the Rooster based on the time of day it is celebrated; at dawn, at cockcrow.

Liturgically, the practice of Simbang Gabi had its origin in the Rorate Masses  (Gaudencio B. Cardinal Rosales, D.D., Archbishop of Manila. Guidelines on the Celebration of Simbang Gabi in the Archdiocese of Manila, 2010)  which takes its name from the first word of its introit (Entrance Hymn): “Rorate, caeli, desuper, et nubes pluant iustum,” or “Drop down dew, O heavens, from above, and let the clouds rain down righteousness.” It is a Mass  celebrated early in the morning in honor of the Virgin Mary in which the interplay of light and darkness convey the meaning of Advent.

“Throughout the centuries, the celebration of Simbang Gabi or Misa Aguinaldo has been preserved, enriched and sustained by the Filipino people in spite of the pastoral and liturgical challenges it underwent. Its form of celebration today is the effect of the long history of the same. It was at the First Plenary Council of the Philippines in 1953 that a formal petition to Rome was made Simbang Gabi.” (Gaudencio B. Cardinal Rosales, D.D.,
Archbishop of Manila. Guidelines on the Celebration of Simbang Gabi in the Archdiocese of Manila, 2010.)  The Papal Indult with these conditions: “On the nine days preceding the Nativity of our Lord, i.e., from December 16 to 24, the solemn votive Mass Rorate Coeli Desuper is sung especially in parish and convent churches, but only once a day with great solemnity and with a big attendance of the faithful.” (Acta et Decreta Primi Concilii Plenarii Ins. Phil, 1953, n.356:J. Ylla, OP, Indultos y Privilegios de Filipinas, UST Press, 1940, p.24.)

On March 24, 1961, Rome granted the continuation of this Indult for five years. (Cf. A. Santamaria, “Misas de Aguinaldo” in Boletin Ecclesiastico de Filipinas (April, 1961), pp. 470-471)  Since then, everywhere in the Philippines, the Simbang Gabi is celebrated with great solemnity: the “Gloria” is sung, ministers in white vestments, and often with Christmas carols and festive ornamentation, in contrast with the sober character of the Advent Season.

Why celebrate Mass early in the morning? As stated earlier, it had its origin from the Rorate Masses which is celebrated at dawn. The Aguinaldo Masses – being originally Votive Masses in honor of Mary during Advent – were held so early  that the faithful attending them could experience in the dawning day a symbol of Mary and her role in the history of salvation. As part of the evangelization of the Philippines by the Spanish friars, they used these masses to accommodate all the people pressured by the daily work and duties as most of them are farmers and fishermen and continued to this day. Lastly, there is a kind of penitential influence in these masses: preparing a clean heart in anticipation of the coming of Jesus Christ, our Savior: the Messiah, the Emmanuel “God with us”. By getting up early and to sacrifice some hours of sleep, the participants were encouraged to do some kind of mortification and to show that they are ready to welcome the Lord at any time. Also, the faithful who attend the Simbang Gabi pray for a closer relationship with Jesus Christ in their lives and aware that God will always provide favors and graces from his abundance.

Here at St. Joachim Church, Hayward, we recognize the gifts of our Filipino parishioners to this faith community through the Simbang Gabi, among others. We celebrate the nine-day novena of Masses in the season of Advent: with an air of reflection, waiting patiently and that joyful anticipation of the Solemnity of the Nativity of Jesus Christ. We acknowledge the need to prepare ourselves spiritually for the coming of the Lord and live the Gospel’s message of love and charity to our brothers and sisters. As one community, regardless of ethnic origin, are welcome and encouraged to participate in this liturgical celebration and communal breakfast. We put our resources together to continue this rich and meaningful Filipino tradition and make it as our faith community’s  annual Advent preparations.

The celebration of the annual Simbang Gabi at St. Joachim Church is  a concrete example of how we live our Parish Mission that states:

“We are a diverse community, uniting in belief and guided by the Holy Spirit. We seek to animate all to full conscious and active participation in the life of the Church and the Mission of Jesus Christ.”