Who is Saint Joachim? 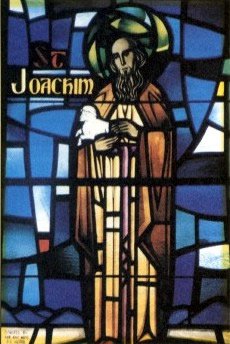 Saint Joachim, whose name means He Whom Yahweh Prepares
was the father of the Blessed Virgin Mary. His feast day is celebrated on July 26th.
He is the patron saint of fathers, grandfathers, and grandparents in general.

While sacred scriptures never mentioned them by name, tradition and ancient documents
tell us that the parents of the Blessed Virgin Mary were known as Joachim and Anne.
They first lived in Galilee and would later settle in Jerusalem, where, in their old age,
the Blessed Virgin Mary was born and raised.
Joachim and Anne died and were buried in Jerusalem.

A church was built during the fourth century, possibly by St. Helena, on the site of the
house of St. Joachim and St. Anne, and their tombs were honored until the close of
ninth century, when the church was converted to a Muslim school.
The crypt which formerly contained the holy tombs was rediscovered on 18 March, 1889.

From The Catholic Encyclopedia